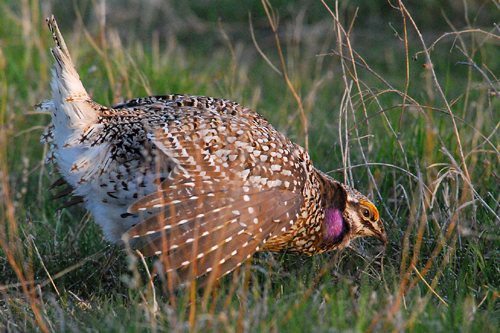 Characteristics and Range The Sharp-tailed Grouse, often misnamed "prairie chicken", is a robust bird that bursts into flight with loud, cackling calls. The short, pointed tail is usually obvious, especially when raised during spring "dancing" at a lek, where the male's yellow combs, violet air sacs, and puffy white undertail coverts are also prominent. Fine white and golden-buff markings on the upper parts are a prominent feature of the cryptic plumage in both sexes. The range extends discontinuously across boreal and prairie regions from Alaska to western Québec and southward across the northern Great Plains to Nebraska, with a number of outlying populations including some introductions. Seasonal movements are mostly local, though the poorly known northern race is irruptive (Connelly et al. 1998).

Distribution, Abundance, and Habitat Atlas records are concentrated primarily in the Prairie Potholes and partly agricultural portions of the Boreal Taiga Plains and Boreal Hardwood Transition. Occurrence is sparse in the most intensively agricultural regions of the Red River Valley and southwest of Lake Winnipeg. A substantial boreal population exists in the fens, heaths, and extensive burns that characterize much of the Grand Rapids - Ponton - The Pas region. While the Sharp-tailed Grouse was barely detected in the Boreal Softwood Shield, small numbers were also found in the eastern portion of the Taiga Shield & Hudson Plains (six squares). The maps of computed relative abundance and probability of observation both emphasize (in decreasing order of importance) the southwestern Prairie Potholes, the southern Interlake, and the region east of The Pas. Jehl (2004) documented the Sharp-tailed Grouse as a rare visitor to the Churchill region, but it appears that The Birds of Manitoba overestimates the range extent in northwestern Manitoba. Preferred habitat, whether prairie or boreal, has large open areas (for feeding and lekking) juxtaposed with shrubby or dense vegetative cover (for roosting and nesting). Wooded cover becomes increasingly important in winter, especially in regions where open land is mostly cultivated.

Trends, Conservation, and Recommendations Analysis of BBS data indicates a widespread increasing population trend in the face of increasingly intensive agricultural practices, which is perhaps offset by the recent, prolonged "wet cycle" climatic conditions. This is encouraging and indicates a sustainable current level of hunting. Historically, declines were most severe for southern and peripheral populations, with extirpation in several U.S.A. states attributed mainly to habitat loss (Connelly et al. 1998). The Sharp-tailed Grouse is an iconic element of "wild prairie" that should be treasured, and it merits an ongoing, primary position in Manitoba wildlife conservation efforts. Lek surveys provide the best means of monitoring population levels and habitat quality, as well as spectacular viewing opportunities. Important conservation measures include the retention of ungrazed, unmown native grassland and (where native cover is not available) the planting of appropriate cover vegetation (Connelly et al. 1998).