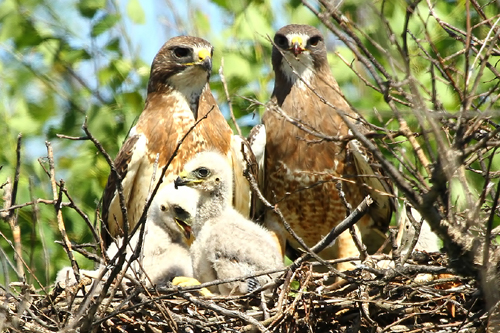 Characteristics and Range The Swainson's Hawk is a graceful buteo with long tapered wings, which are held in a slight dihedral (V-shape) in flight. Its dark flight feathers and breast band contrast with otherwise whitish underparts. Dark-morph birds are rare in Manitoba; intermediate-morph birds are seen regularly in the southwest. The breeding range stretches from the Canadian Prairies and southern British Columbia to northern Mexico. The species' status as a breeder in Alaska, Yukon and the Northwest Territories is unclear (Bechard et al. 2010). Almost the entire population winters on the pampas of Argentina.

Distribution, Abundance, and Habitat Nearly all atlas records came from the Prairie Potholes, where over 40% of squares were occupied, with highest concentrations south of Riding Mountain and west of the Pembina River valley, but with a notable absence in the heavily wooded Turtle Mountains. A second, disjunct concentration around Winnipeg has existed for decades (The Birds of Manitoba). Scattered observations were made in the Boreal Taiga Plains, east of the Red River and in the southern Interlake. This species declined greatly in number after European settlement of the prairies and recent decades have seen a further reduction due to a crash in ground-squirrel populations and continued loss of grasslands (Houston and Schmutz 1995a). Competition with Red-tailed Hawks has also been mentioned as a possible factor in these declines (Bechard et al. 2010), but this dœs not appear to be a current concern in Manitoba. Habitat on the breeding range consists of native prairie, pastures, sparse shrublands, and small areas of open woodland. The species has adapted well to feeding in agricultural areas, for example, alfalfa and wheat fields, but not where crops are taller than native prairie (Bechard et al. 2010). Nests are usually located in isolated trees, shelterbelts, wetland borders, and abandoned treed farmsteads (Bechard et al. 2010).

Trends, Conservation, and Recommendations Persecution of Swainson's Hawks after European settlement continued into the 1930s and may still be a concern on the wintering grounds (Houston and Schmutz 1995b). Pesticide use in Argentina has also resulted in high mortality (Goldstein et al. 1996). Continued loss of habitat on the breeding and wintering grounds remains a major threat, as is disturbance of nesting birds early in the breeding cycle (Bechard et al. 2010). Maintenance of foraging and nesting habitat, including preservation of nest trees, is important. While urgent measures were taken to ban the insecticide responsible for mass mortality (monocrotophos) on the wintering grounds, ongoing vigilance and expanded education programs are essential (Bechard et al. 2010).