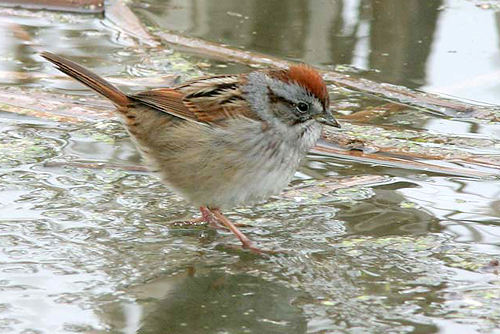 Characteristics and Range As well as habitat clues implied by its name, the Swamp Sparrow is distinguished from other medium-sized sparrows by rufous highlights in the wings and tail, a rusty cap, little or no streaking on the dark-grey breast, and an absence of wingbars. The song is a musical trill, slower and louder than the song of the Chipping Sparrow. The breeding range extends across Canada from eastern British Columbia and southern Northwest Territories to southern Labrador and Newfoundland, and well into the northern U.S.A. from the eastern Dakotas through the Great Lakes region to the northern Atlantic Seaboard. There is little overlap with the winter range, which stretches from Iowa to southern Ontario and southern New England, locally in the Maritimes, southward to the Gulf States and northern Mexico, with rare occurrence westward to the Pacific Coast (Mowbray 1997).

Distribution, Abundance, and Habitat Atlas records span every region of Manitoba, extending north of the boundary estimated in The Birds of Manitoba to include a cluster of 21 contiguous squares in and near the Arctic Plains & Mountains. Computed relative abundance was greatest in three zones: a portion of the Boreal Taiga Plains from southern Lake Winnipegosis across the central Interlake; the southern Boreal Softwood Shield near the east shore of Lake Winnipeg and extending southward through the Boreal Hardwood Transition; and the coastal portion of the Hudson Plains. These zones are characterized by extensive level terrain with numerous wetlands of varying sizes. Elsewhere in the boreal forest, abundance was generally high except for the Taiga Shield of extreme northwestern Manitoba. Abundance was much lower in the Prairie Potholes, especially in intensively farmed agricultural zones such as the western Red River valley. Probability-of-observation patterns are broadly similar, but with stronger emphasis on northern and eastern portions of the boreal forest, the reasons for which are unclear. The Swamp Sparrow breeds in a variety of wetlands (bogs, fens, and marshes as well as swamps) with an evident preference for boreal and transitional settings over prairie marshes. The nest is typically slightly elevated in dense vegetation over or near shallow water (Mowbray 1997).

Trends, Conservation, and Recommendations Analysis of BBS data indicates generally stable to slightly increasing population trends, though there are declines near some of the range extremities and survey coverage of boreal wetlands is limited. While conservation of extensive wetlands is important, the Swamp Sparrow's resilience is partly due to its adaptability to small wetlands (both natural and manmade) such as beaver ponds, water treatment areas, fishing ponds, and even roadside ditches. It also has relatively unspecialized winter habitat requirements (Mowbray 1997). Conservation concern for this widespread species is therefore low, and the only recommendation is for continued monitoring.