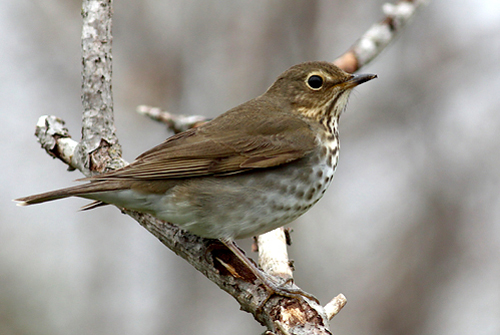 Characteristics and Range Swainson's Thrush is a small, brown-and-white thrush with a distinctly buffy face and broad eye-ring. It has an ascending, flute-like song that is slightly scratchy in quality and lacks the clear introductory whistle of the Hermit Thrush. This common thrush nests across the boreal forest from Alaska to Newfoundland, south to New England, around the Upper Great Lakes, and through the Rocky Mountains to New Mexico (the so-called "olive-backed" group), as well as along the Pacific coast as far as southern California ("russet-backed" group). Swainson's Thrushes winter along the Andes (olive-backed) and in Central America (russet-backed) (Mack and Yong 2000).

Distribution, Abundance, and Habitat Atlas data show a range that differs little from that depicted in The Birds of Manitoba, except for possible and probable breeding evidence in seven squares within 20 km of the Hudson Bay coast (including one square in the Arctic Plains & Mountains) and in the Prairie Potholes in a north-south band from the Arden Ridge to the Spruce Woods and the Pembina River valley. These exceptions aside, Swainson's Thrush was absent from most of the southern Prairie Potholes. Peak relative abundance occurred in the boreal portions of the Manitoba Escarpment (Riding Mountain, Duck Mountains, and Porcupine Hills); however, abundance was almost as high evenly across the boreal biome, decreasing north of Gillam and east of Tadoule Lake towards Hudson Bay and south into the boreal-parkland transition (opposite to the pattern shown by the Veery) and the Prairie Potholes. The probability of observation is largely similar but unexpectedly high in far northwestern Manitoba, where the Gray-cheeked Thrush was also abundant. Peak abundances were three times lower than peak Hermit and Gray-cheeked Thrush densities but similar to those of the Veery. This is noteworthy because BBS data suggest Swainson's Thrush to be more abundant than the Hermit Thrush in Manitoba. In the southwest Prairie Potholes (Atlas Regions 1 and 2), Swainson's Thrush overlapped with the Hermit Thrush in eight squares, especially in the boreal island of the Spruce Woods, although neither was previously believed to breed in this area (The Birds of Manitoba), and only possible breeding evidence was obtained. Swainson's Thrush is found predominantly in coniferous forests, but also in mixed woods, typically where the canopy is fairly closed and trees are dense, and less commonly in early-successional habitats (Mack and Yong 2000).

Trends, Conservation, and Recommendations Swainson's Thrush numbers appear relatively stable across Canada and within Manitoba (BBS data), but are decreasing in some parts of the range, especially in western North America (Mack and Yong 2000). Habitat loss in some parts of the range (breeding and non-breeding) poses a threat and there is some evidence this species is sensitive to forest fragmentation (Mack et al. 2000). In Manitoba, Swainson's Thrush would benefit from measures to reduce fragmentation within large tracts of coniferous and mixed forest (Mack et al. 2000).