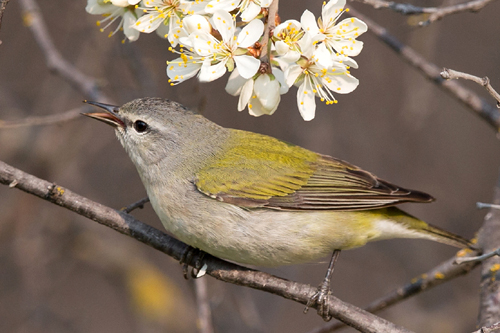 Characteristics and Range This plain wood-warbler's grey head, green back and whitish underparts (sometimes tinged with yellow) suggest a vireo, were it not for its small size, fine bill, and lively movements. The male's loud, staccato, usually three-part song is distinctive, though sometimes confused with the Nashville Warbler's slower and more melodious two-part phrasing. The breeding range covers most forested regions of Canada, except parts of southern British Columbia and southern Ontario, extending slightly into parts of southern Alaska and the northern conterminous U.S.A. The winter range extends from southern Mexico to northwestern South America, with small numbers in the West Indies (Rimmer and McFarland 2012). Tennessee, where the first scientific specimen was collected, lies within the broad migration zone.

Distribution, Abundance, and Habitat This is a "budworm warbler", noted for localized breeding concentrations in response to spruce budworm outbreaks, such as occurred in southeastern Manitoba in the early 1980s and mid-1990s. Local abundance can vary greatly from year to year, or be locally elevated for several consecutive years. For example, 37 years of Bird River BBS totals show by far the greatest variability of the 22 warbler species detected—from low single digits (zero in 2015) to a peak of 114 (one-third of all warblers heard or seen) in 1983 (pers. obs.). Away from budworm outbreaks, other caterpillars form most of the summer diet (Rimmer and McFarland 2012). Year-to-year fluctuations are partly smoothed in the five-year snapshot provided by the atlas.

Atlas records closely match published range boundaries (The Birds of Manitoba, Rimmer and McFarland 2012), with sparse breeding at best in most of the Prairie Potholes region and absence from most of the Nunavut land border area. Province-wide, the Tennessee Warbler ranked third of all warblers in point-count detection (6,533 point counts) and fourth in overall detection (1,347 squares). Abundance and detection were both highest in the Boreal Softwood Shield, and generally high in other parts of the boreal forest, but much lower in the Boreal Hardwood Transition. Both relative abundance and probability-of-observation maps show broadly high levels in northern parts of the boreal forest and locally southward at major features of the Manitoba Escarpment. Various forested and shrubby habitats are occupied within this wide breeding range, with a preference for moist, coniferous and mixed-wood stands of all ages; the ground nest is often placed in a moss hummock.

Trends, Conservation, and Recommendations The Tennessee Warbler's northern distribution limits its accessibility to BBS monitoring. Data analysis indicates widespread, long-term decreases in eastern and central portions of the range (including southern Manitoba), but increases in Alberta and British Columbia. Because of the association with forest insect pests, the acute and indirect effects of various insecticides on the Tennessee Warbler have been studied (Rimmer and McFarland 2012). This warbler is also commonly represented among migrants killed by collision at transmission towers and other tall structures (Rimmer and McFarland 2012). Continuing high numbers and wide range make it a species of low conservation concern at present; nevertheless, improved monitoring and biological understanding are desirable.