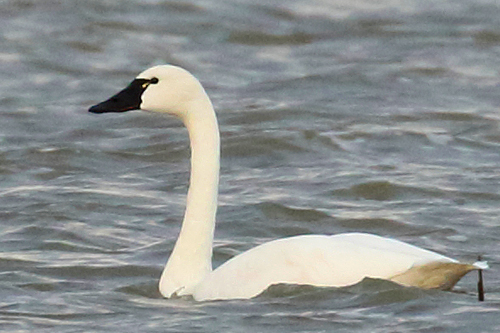 Characteristics and Range One of two regularly occurring swan species in Manitoba, the Tundra Swan is more common than the Trumpeter Swan and has a more northerly breeding range. Identifying the two species is difficult and can only be achieved when the birds are near or when the call is heard. The Tundra Swan is smaller on average, with a shorter bill and other subtle differences. The breeding range stretches from Alaska across the Arctic to Baffin Island and Labrador and includes areas around Hudson Bay. There is recent evidence of the North American subspecies ("whistling swan" as distinct from the Eurasian "Bewick's swan") breeding in eastern Siberia (Limpert and Earnst 1994). Western populations winter along the Pacific coast and at various locations in the Rocky Mountains, including extreme southern British Columbia. Eastern populations, including those from Manitoba (extending to the North Slope of Alaska), winter along the Atlantic coast of the U.S.A. and at scattered inland locations (Limpert and Earnst 1994).

Distribution, Abundance, and Habitat Almost all atlas records, with a few notable exceptions, came from the Arctic Plains & Mountains and the Taiga Shield & Hudson Plains. A pair with young at Waskaiowaka Lake was well west and south of the range shown in The Birds of Manitoba. Sightings in the Arctic Plains & Mountains also constituted an extension of the known range. The avifauna of the above regions was poorly known previously; hence, these records no doubt reflect increased observer effort rather than a true range extension. Swans recorded near North Knife Lake and near Paragon Lake were not identified to species. The Tundra Swan was thought to have been extirpated from nesting areas along southern Hudson Bay in past centuries, due to the quill and skin trade, but reoccupation commenced in the 1960s (Lumsden 1975). This species is currently a fairly common and conspicuous coastal breeder; it was recorded in 73% of squares in the Arctic Plains & Mountains, northwest of Churchill, with another concentration in Wapusk National Park, with both areas showing very high probability of observation. Breeding habitat is described as Arctic lakes and ponds, usually above the treeline (Limpert and Earnst 1994), but note the exceptions above and recent extralimital breeding records in Saskatchewan (Tosh 2007).

Trends, Conservation, and Recommendations Although controversial, swan hunting continues on a regulated basis in parts of the U.S.A. (Limpert and Earnst 1994). Lead poisoning from ingested shot and fishing sinkers is an ongoing concern (Limpert and Earnst 1994), although somewhat abated by the banning of lead shotgun pellets for waterfowl hunting, but not other forms of hunting. In the breeding range as a whole, oil and gas drilling, mining and related activities pose the greatest potential threats, while continued wetland drainage is also of concern for migrating birds in the Prairie Potholes (Limpert and Earnst 1994).