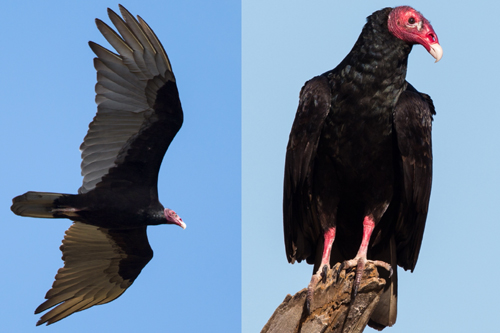 Characteristics and Range This large, black carrion-eater with long wings and tail, and an unfeathered head (red in adults), is most often seen overhead, tilting from side to side while soaring on wings held in a shallow dihedral (V-shape). It breeds from southern Canada to southernmost South America (Kirk and Mossman 1998). Birds from the northern part of the breeding range are migratory. Although the winter range of vultures that breed in Manitoba is unknown, individuals fitted with transmitters in Saskatchewan have been found to winter in Southern Mexico, Costa Rica, and as far south as the Llanos region of Venezuela (Houston et al. 2008, Hedlin et al. 2013).

Distribution, Abundance, and Habitat Turkey Vulture detections during the atlas period show the species ranging considerably farther north than shown in The Birds of Manitoba, but this is likely a reflection of intensive field work rather than a true range extension. The greatest concentrations of sightings took place in the extreme southeast (Boreal Hardwood Transition) and in the southwest, roughly west of Lake Manitoba and south of Riding Mountain National Park (Prairie Potholes), with lower numbers east of Lake Winnipeg (Boreal Softwood Shield) and the southern Interlake (Boreal Taiga Plains). The northernmost confirmed breeding took place in the vicinity of Dauphin and at Hecla Provincial Park, but birds were noted as far north as Thompson. The status in the central third of the province is unclear. It has been postulated that many Turkey Vultures in this part of the province may be non-breeders, but this is hard to prove, as nests in natural settings are very difficult to find. Indeed, most confirmed breeding records came from the Prairie Potholes, where vultures usually breed in abandoned farm buildings and are therefore easier to confirm. Both forested areas and farmland are used for nesting and feeding, but extensive areas of row-crop farmland are avoided (Kirk and Mossman 1998). This is borne out by the paucity of sightings in the region immediately south and west of Winnipeg.

Trends, Conservation, and Recommendations In the past, many vultures were shot or trapped, in the mistaken belief that the species killed newborn calves or spread disease (Kirk and Mossman 1998). In addition, contaminants, such as DDT, formerly posed a serious threat, and may still do so on the wintering grounds. Lead poisoning (ingested pellets), mercury poisoning and collisions with vehicles remain threats (Kirk and Mossman 1998). BBS data show a statistically significant short-term and long-term increase in Canada but the trends in Manitoba are not statistically significant, no doubt due to small sample sizes (many long-term observers have noted increases here). The species appears to be secure as a breeder in Manitoba (Kirk and Mossman 1998).