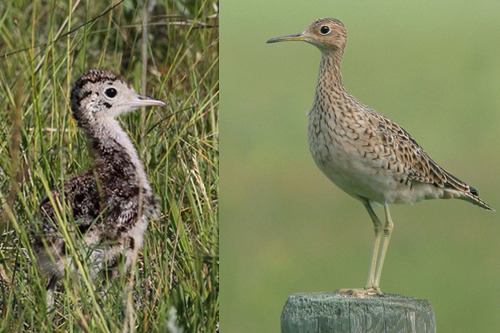 Characteristics and Range An iconic grassland shorebird, the Upland Sandpiper is best known for its loud wolf-whistle call and fondness for perching on fence posts, poles, and wires. This curlew-relative's most notable features include a distinctively small head atop a slender neck, bright yellow legs, and a short, straight, yellow bill with a black tip. The Upland Sandpiper has an unusual breeding distribution. It nests throughout the northern and central Great Plains as far south as Oklahoma, north into parklands and the southern boreal fringe, east intermittently around the Great Lakes to New Brunswick and Delaware, and with several disjunct populations in areas such as Oregon, British Columbia, and either side of the Alaska-Yukon border, where alpine wet meadows, taiga bogs, and alluvial floodplains provide breeding habitat (Houston et al. 2011). The Upland Sandpiper overwinters in pampas and other grasslands of southern South America.

Distribution, Abundance, and Habitat Atlas results show the Upland Sandpiper nesting throughout the Prairie Potholes north and east into the southern Boreal Taiga Plains and the western edge of the Boreal Hardwood Transition. This range is much as estimated in The Birds of Manitoba, but with a noteworthy lack of records from Riverton to Red Deer Lake. Despite this absence of detections in the northern Boreal Taiga Plains, an exceptional outlier was a pair seen multiple times at the Thompson airport in June and July of 2010 and 2011. The peak abundance was in the southwest Prairie Potholes (south of the Assiniboine River and west of Glenboro) excepting wooded areas such as the Turtle Mountains, decreasing northward and eastward but with medium abundances east of the Arden Ridge to Lake Manitoba. The probability of observation has a similar pattern but also shows a high likelihood of detection in the southern Red River valley. Unlike many shorebirds, and as its name implies, the Upland Sandpiper is not typically associated with wetlands or shorelines (Houston et al. 2011). The Upland Sandpiper breeds in native prairie and tame pastures in areas with both tall and short grasses (Houston et al. 2011). In agricultural areas, this species can persist in low numbers where there are grassy road margins (The Birds of Manitoba).

Trends, Conservation, and Recommendations Population declines were steep in periods of unregulated hunting until the introduction of the Migratory Birds Convention Act in 1916 (Houston et al. 2011). Habitat loss from agricultural expansion in the 20th century has caused subsequent declines (Houston et al. 2011). BBS data show steep declines in Canada from the 1970s until the 1990s when populations began to stabilize, hence no significant long-term trend. The population trajectory in Manitoba is similar but still shows a significant long-term decline of >3% per annum. This species has not been ranked by COSEWIC and is considered Least Concern by the U.S. Shorebird Conservation Plan Partnership (Brown et al. 2001). Despite the ranking, some jurisdictions across North America have made this species a conservation priority (Houston et al. 2011).