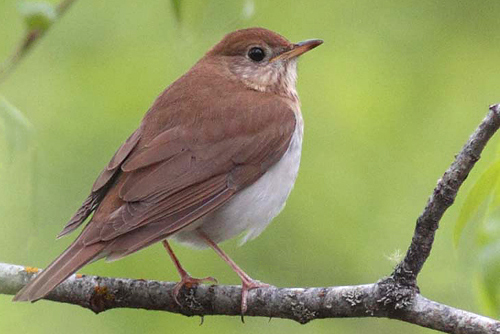 Characteristics and Range The Veery is a secretive thrush that forages on the damp forest floor but nevertheless fills the woodland canopy with its hauntingly ethereal song. It is best distinguished from similar thrushes of Manitoba (Swainson's, Hermit, and Gray-cheeked) by its song of descending couplets, veer call, weak speckling on the breast, and evenly rufous back, wings, and tail. The Veery nests in deciduous and mixed forests across the southern boreal biome from central British Columbia to southern Newfoundland, south to Colorado and around the Great Lakes to Pennsylvania, as well as south along the Appalachian Mountains and in small disjunct areas as far south as New Mexico (Heckscher et al. 2017). This long-distance migrant overwinters mainly in the Amazon Basin and the Atlantic forest of southeastern Brazil (Heckscher et al. 2017).

Distribution, Abundance, and Habitat As depicted in The Birds of Manitoba, the Veery was found across southern Manitoba, from near Berens River (~52°N) in the east to near Flin Flon (~54.5°N) in the west. There were two outlying possible breeding records: 30 km southwest and 60 km northeast of Thompson respectively. The Veery reached its highest abundances along the southern boreal fringe, especially in the Boreal Hardwood Transition, with slightly lower relative abundance in the southern Boreal Taiga Plains and along the slopes of the Manitoba Escarpment at the transition of the Prairie Potholes including parts of the Westlake Plains. The probability of observation shows a similar pattern, but with a band of relatively high values along the Arden Ridge and in parts of the Upper Assiniboine Valley. In Manitoba, the Veery is generally most common in aspen-dominated woodlands (The Birds of Manitoba) and its pattern of relative abundance reflects this, roughly following the boreal-parkland transition. It was found nesting in all but the extreme southwest of the Prairie Potholes, but only in wooded habitats such as wooded islands and riparian corridors. Atlas data also suggest current absence from the agriculturally dominated Red River Valley south of Winnipeg. Although its range extends well into the boreal biome, the Veery is not found in pure coniferous stands, and the northernmost birds appear to seek out pockets of deciduous growth. Areas with a dense and often damp understorey are preferred, especially early-successional habitats such as beaver swales and areas regenerating after other disturbances (Heckscher et al. 2017).

Trends, Conservation, and Recommendations BBS data show long-term declines in Canada, although there is no significant trend in Manitoba. The causes of decline are unclear but, as with many long-distance migrants, rapid deforestation in South America may have a negative impact on the Veery (Heckscher et al. 2017). In Canada, threats include the loss of second-growth forests and activities that increase forest fragmentation (Heckscher et al. 2017). In Manitoba, the Veery is one of a suite of primarily deciduous forest species (also including the Threatened Golden-winged Warbler and Eastern Whip-poor-will) that would benefit from conservation of the increasingly fragmented boreal-parkland transition.