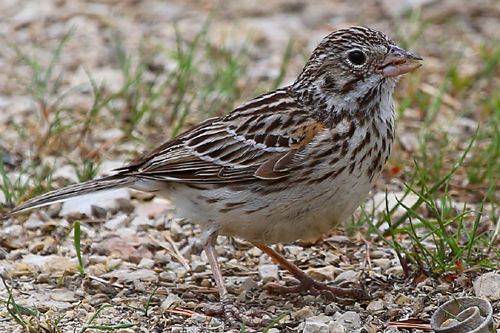 Characteristics and Range The Vesper Sparrow is so-named for its evening singing, although it dœs sing at other times of the day. It is a pale, streaked sparrow of open areas known to country-road travellers as it flushes from gravel roadsides displaying its characteristic white outer tail-feathers. Closer inspection will reveal a white eye-ring and hint of rufous at the shoulder. The Vesper Sparrow breeds through a broad band across much of southern Canada and the northern conterminous U.S.A. in natural prairies or open habitat in boreal or hardwood ecotones. It winters from the southern U.S.A. to southern Mexico (Brewer et al. 2006).

Distribution, Abundance, and Habitat In Manitoba, the Vesper Sparrow is a common breeder throughout the Prairie Potholes and southeastern Boreal Taiga Plains, and a local breeder in the remainder of the Boreal Taiga Plains and the Boreal Hardwood Transition. The highest relative abundances were found in the extreme southwest, south-central, and southern Interlake areas. There are no atlas records north of Ponton, although The Birds of Manitoba extended the breeding range well into the Boreal Softwood Shield based on a nest record for Thompson and an observation in Lynn Lake. If Vesper Sparrows breed in this region it is infrequent, although several atlas records in the Interlake and near The Pas at the northern edge of the Boreal Taiga Plains suggest they could be expected in suitable habitat. The northern Interlake observations were associated with heavily logged areas, recent burns, and wide road or power line rights-of-way. Vesper Sparrows are ground-dwelling and prefer open habitats such as dry grasslands, old fields, croplands, pastures, recent post-fire uplands, heavily-logged areas, and abandoned mine sites, as long as there are some shrubs and elevated singing perches. Vegetation structure seems more important than plant species for habitat selection (Jones and Cornely 2002).

Trends, Conservation, and Recommendations Although the Vesper Sparrow remains easy to find over most of its range in Manitoba, BBS data indicate a dramatic decline since 1970, both in Canada and Manitoba. In Manitoba, the declines are >50% in the Boreal Taiga Plains and > 25% in the Prairie Potholes (Sauer et al. 2017). Canadian trends may be driven by decreases in the east as suitable habitat disappears (Rising 2007). The Vesper Sparrow is a grassland species that responds quickly to habitat changes, taking advantage of disturbances in adjacent forested ecotypes. This suggests it might be more resilient than some species, but it will also abandon areas that become overgrown or revert to forest. Interlake populations are especially vulnerable as fire suppression and changing forestry practices reduce availability of open habitat. In agricultural areas, large-scale tillage, chemical use, early harvest, and monoculture cropping are implicated in declines (Jones and Cornely 2002). Encroachment of tillage onto road allowances and road shoulders further exacerbates this problem. Limited breeding success in some croplands cannot sustain viable populations and likely creates a population sink. Grasslands restoration and easements would benefit this species; breeding areas away from human disturbance increase abundance (Jones and Cornely 2002). Loss of grasslands in the wintering range is also a concern.