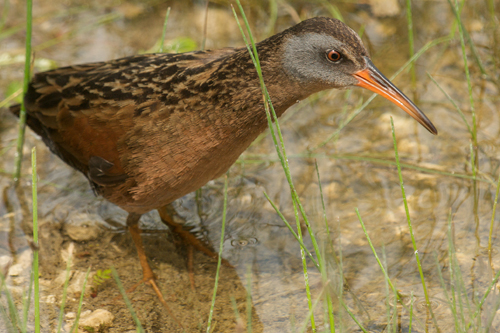 Characteristics and Range The Virginia Rail is about the same size as a Sora, but has a longer, red bill, largely reddish-brown plumage, grey face and barred black-and-white lower flanks. Like most rails, it is more often heard than seen. The breeding range stretches in an irregular band from coast to coast across North America, north to the Prairie Provinces and south to California and New Mexico, with disjunct populations in Mexico and Central America. The winter range is primarily along both the Atlantic and Pacific coasts of the U.S.A., through parts of southwestern U.S.A. and into the northern half of Mexico (Conway 1995).

Distribution, Abundance, and Habitat The distribution documented by atlas fieldwork is very similar to that depicted in The Birds of Manitoba, with the northernmost records near The Pas. Extralimital sightings have occurred at Churchill in the past, but not during the atlas years. The Virginia Rail was detected in ~25% of squares in the Prairie Potholes, with lower percentages in the Boreal Taiga Plains and Boreal Hardwood Transition, plus a single record in the Boreal Softwood Shield. The species is most vocal around dawn and dusk early in the breeding season and is infrequently recorded during point counts or casual daytime birding, which explains the low probability-of-observation values. Even on a perfect night in extensive marshland, it is rare to find more than four or five birds in a square. The greatest relative abundance was in marshes surrounding Lake Manitoba and in the southwest (south of Riding Mountain), except the elevated portions of the Manitoba Escarpment. Breeding habitat in Manitoba consists of large freshwater marshes, with dense, tall emergent vegetation (cattails, reeds, bulrushes). Shallow water (<15 cm) and high invertebrate abundance are additional important features (Conway 1995).

Trends, Conservation, and Recommendations Fall hunting is allowed in 37 states and in Ontario, but the total harvest is thought to be within sustainable levels (Conway 1995). Collisions with wires, towers, and vehicles are common. Loss of wetlands and fluctuating water levels in breeding marshes probably pose the greatest threat to the species. Securement and maintenance of suitable wetland habitat, and restoration projects such as a much-needed restoration effort in the Netley-Libau Marsh, would benefit the Virginia Rail.