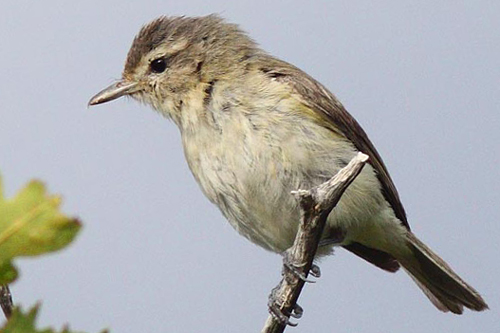 Characteristics and Range The Warbling Vireo is a drab olive-grey vireo with no wingbars and varying degrees of pale yellow on its whitish underparts. It is typically identified by its facial pattern, which is a faint eye-line and a white supercilium, giving it it a wide-eyed appearance. It is most often confused with Philadelphia Vireo which has a darker, more contrasting eye-line and yellow in the throat area. The song is unusual for a vireo, consisting of a musical warble reminiscent of a Purple Finch. The breeding range extends mostly south of the boreal forest from Yukon to New Brunswick, south through much of the U.S.A. (excluding desert regions and the humid southeast), and reaches its southern limit at moderate elevations in the mountains of western Mexico. The winter range extends from western Mexico to northern Nicaragua (Gardali and Ballard 2000).

Distribution, Abundance, and Habitat Atlas results documented the breeding range much as described in The Birds of Manitoba but with two extralimital records (possibly overshooting migrants) near The Pas. The core distribution of the Warbling Vireo was in the Prairie Potholes, where this species was found in 90% of surveyed squares. It was also found in good numbers along the southern and western edge of the Boreal Taiga Plains, but the percentage of occupied squares in this BCR is lower (29%) because the species dœs not penetrate this BCR's extensive coniferous forests. Likewise, the Warbling Vireo was found breeding in the Boreal Hardwood Transition, although mainly along its western edge (detected in 29% of surveyed squares), and the southernmost parts of the Boreal Softwood Shield (1%). This distribution is linked to the presence of tall deciduous woodlands, especially with trees in the poplar family, and a relatively open canopy (Gardali and Ballard 2000), and to a lesser extent with tall willow swales (The Birds of Manitoba). The Warbling Vireo's northern range limit is essentially defined by the border of the boreal forest, with only scattered records beyond this. The relative-abundance analysis shows a complicated pattern that is likely a response to the prevalence of open woodlands, with the highest abundances found in the aspen parkland areas surrounding Lake Manitoba, the western Prairie Potholes along the Saskatchewan border and in the Turtle Mountains, and the southernmost part of the Boreal Taiga Plains, but with only slightly lower relative abundance between these areas. In these areas of peak density, this species can be found in even the smallest copses of trees, shelterbelts, and parks (The Birds of Manitoba).

Trends, Conservation, and Recommendations Long-term BBS data show a decline in Manitoba but an overall increase in Canada. The Warbling Vireo has declined in urban centers such as Winnipeg (pers. obs.) and in the Pinawa area and elsewhere in the Boreal Hardwood Transition since the 1970s, paralleling the decline of the Baltimore Oriole (P. Taylor, pers. obs.). Though it remains a common bird, the wintering grounds for this species are significantly smaller than the breeding range, so habitat loss on the wintering grounds could have a dramatic impact (Gardali and Ballard 2000).