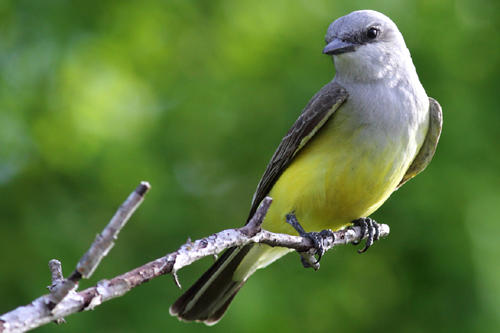 Characteristics and Range The Western Kingbird, with its easily identifiable grey head, bright yellow underparts and dark tail, is a relative newcomer to Manitoba (c. early 1900s), likely following westward settlement, and associated establishment of trees, across the Great Plains (Houston 1979). This species breeds in open habitats throughout the Great Plains of North America west to the Pacific Coast and south to the northern fringe of Mexico. Manitoba is at the northeastern edge of its range.  It winters in similar habitats along the Pacific Coast from southern Mexico to Costa Rica, as well as southern Florida (Gamble and Timothy 2012).

Distribution, Abundance, and Habitat The distribution of the Western Kingbird documented by the atlas differs little from that shown in The Birds of Manitoba except along areas of the Manitoba Escarpment from the Turtle Mountains to Riding Mountain National Park, where it is noticeably absent from most squares. This is likely the result of topography and land cover that are not conducive to this species' preference for open non-sloping habitats. Peak abundances occur in the Prairie Potholes, most noticeably in the southwestern mixed-grass prairie, followed by the Boreal Taiga Plains, where it is primarily restricted to open agricultural areas in the southern portion of that region. Despite low relative abundance in the Boreal Hardwood Transition, the species was detected in a slightly greater proportion of sampled squares in that region compared to the Boreal Taiga Plains. This is perhaps a result of an observed association with small towns along the eastern periphery of the species' range within the Boreal Hardwood Transition, possibly influencing detectability and distribution within this primarily forested area.

Trends, Conservation, and Recommendations The Western Kingbird is considered generally stable to increasing in North America with a few notable exceptions including Manitoba, where this species has decreased significantly over both the 10-year and long-term periods (BBS data), particularly in the southeastern part of the province. Conservation activities as a whole may not be necessary given its current status; however, the species would benefit from locally maintaining shelterbelts, abandoned farmyards and other similar structures which the species can use for nesting; protecting riparian habitats and beach ridges; and restricting aspen encroachment onto native prairie rangelands (Gamble and Timothy 2012).