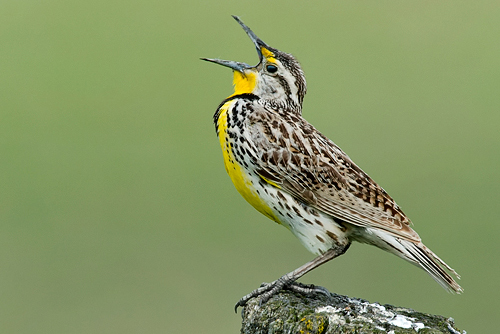 Characteristics and Range The Western Meadowlark's rich and melodious primary song repertoire, often delivered from a fence post or roadside wire, is the very essence of prairie spring. Related to New World blackbirds and orioles (Icteridae) rather than larks, meadowlarks have a starling-like silhouette: sturdy and short-tailed with a gradually tapered, probing bill (hence the genus name Sturnella). Finely marked brown upper parts contrast with the brilliant yellow breast and its bold black chevron, and white outer tail-feathers are conspicuous when a meadowlark flushes. Western Meadowlarks breed in a variety of open terrain from southern British Columbia across the prairies to the southern Great Lakes, and south through the western half of U.S.A. to parts of northern Mexico. They winter in the southern two-thirds of the breeding range, spilling further into Mexico and the south-central U.S.A. (Davis and Lanyon 2008). There is significant range overlap with the Eastern Meadowlark, which is rare in Manitoba.

Distribution, Abundance, and Habitat The distribution of atlas records closely follows the combined extent of grassland and agriculture in Manitoba, including small numbers in insular patches of farmland (e.g., near Swan River, Carrot River, and East Braintree). This precise association overrides affinity for particular BCRs, though there is an obvious concentration of records in the Prairie Potholes (88% of squares with >3 hours of survey effort, and 81% of all point-count detections). Within the agricultural zone, there is a clear preference for unconverted prairie, lightly grazed pasture, and hayland over monoculture cropland. Isolated records at Bissett and Norway House are the only ones well beyond the mapped limit in The Birds of Manitoba, possibly representing overshooting migrants or temporary breeding locations. Computed abundance and probability of observation each show two broad peaks, one in southwestern Manitoba (mostly south of the Assiniboine River valley), and another in the southern Red River valley, separated by the Manitoba Escarpment.

Trends, Conservation, and Recommendations BBS data reveal widespread long-term declines and few increases. Declines are steepest in eastern portions of the continental range, and 10-year trends suggest recent stabilization of numbers in Manitoba. Major factors in the declines include direct mortality and nest destruction by grassland cultivation and haying (Davis and Lanyon 2008). Where nesting habitat is reduced to roadside strips, birds may be exposed to increased predation and other hazards. The Western Meadowlark also endures significant nest parasitism by cowbirds (Davis and Lanyon 2008). Being an early spring migrant, it can suffer high mortality from late blizzards, as happened in southern Manitoba in April 1997. Nonetheless, the Western Meadowlark is much more persistent than most grassland specialists in agricultural land, including cleared farmland. Because of this persistence, it is still classified as Least Concern; nevertheless, pro-active conservation measures are warranted by the almost range-wide decline. Grassland management for meadowlarks should aim to optimize vegetation structure: neither too short and sparse, nor too tall and dense (Davis and Lanyon 2008), with farming activity timed to minimize nest destruction.