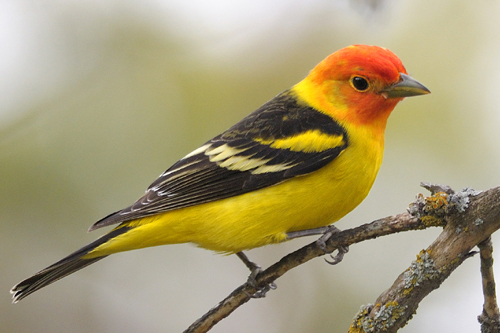 Characteristics and Range With bright yellow underparts, coal-black upperparts, and bright red head, the male Western Tanager in breeding plumage is a striking bird, much more likely to draw attention than the yellow-and-grey female. This species breeds in open coniferous and mixed forests across western North America from the Northwest Territories south to California and western Texas, including a band across central Saskatchewan that was not formerly confirmed to reach Manitoba (Hudson 1999). It winters from Mexico to Costa Rica and in a small pocket of coastal southern California, with small numbers wintering around the Gulf of Mexico and Atlantic coasts (Hudon 1999). The latter is a possible source of Manitoba spring migrants, which have increased as feeder visitors in recent years.

Distribution, Abundance, and Habitat The Birds of Manitoba described this species as an "occasional spring and accidental fall migrant", and an "occasional summer visitor" whose breeding in Manitoba has been suspected but not confirmed. The Western Tanager was the first of five species newly confirmed to breed in Manitoba during the atlas effort. The confirmation that Western Tanager breeds in Manitoba came from one pair carrying food (along with a second male) observed over several weeks in a mixed-wood stand with large-diameter trees near The Pas in the Boreal Taiga Plains. This location is ~60 km northeast of a known breeding location at Cumberland House, Saskatchewan noted by Hudon (1999). This species was also recorded twice as possibly breeding in the Boreal Softwood Shield in riparian areas with large diameter trees in Wekusko Falls Provincial Park and near Phillips Lake.

Trends, Conservation, and Recommendations BBS data show a slight long-term increase of the Western Tanager throughout its Canadian range. Its use of large-diameter trees highlights the importance of protecting old growth forests from logging; however, no management is directed at this species in Manitoba due to its limited distribution here.