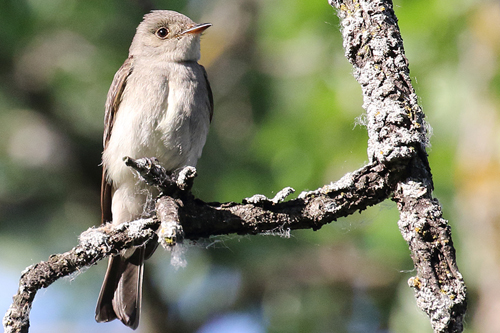 Characteristics and Range This small flycatcher is best distinguished from its Eastern sibling by its buzzy, downward-slurred calls and song phrases, somewhat reminiscent of a distant nighthawk. Manitoba lies at the northeastern extremity of a breeding range extending from southern Alaska to Honduras. The known winter range is smaller, forming a narrow band in montane forest from western Venezuela to central Bolivia (Bemis and Rising 1999).

Distribution, Abundance, and Habitat The species was found in just 14 atlas squares, mostly in and near Riding Mountain National Park, but also scattered northward to the Lynn Lake area. Nine of these 14 records were in the final atlas year (2014), indicative of localized and perhaps sporadic occurrence. Just after the atlas period, a Western Wood-Pewee occupied a territory farther south at Oak Lake in 2015 and 2016, and there are historical records near Lyleton and in the Lauder Sandhills in extreme southwestern Manitoba. Scattered records also extend to southeastern Manitoba, including an apparent family group near Milner Ridge in 1981 and a singing male with an unidentified mate nesting at Patricia Beach in 1997 (The Birds of Manitoba). Breeding habitat in Manitoba (including pre- and post-atlas records) includes riparian woods, beach ridges, wooded residential areas, beaver swamps, and in particular partly cleared or burned coniferous and mixed-wood forest with scattered tall trees. Burned areas in Riding Mountain National Park and the Porcupine Hills were occupied by small numbers of Western Wood-Pewees for a number of years, but this did not persist beyond the early regeneration stages. Nevertheless, several were found in a different part of Riding Mountain National Park in 2014.

Trends, Conservation, and Recommendations The sporadic, peripheral occurrence in various habitats over a large region precludes any realistic conservation plan for this species in Manitoba. The historical record suggests isolated, opportunistic breeding and there may not be a self-sustaining Manitoba population. Eastern Wood-Pewee numbers in western Manitoba do not seem sufficient to provide competition, whereas the scarcity of both species may promote hybridization, which was recently confirmed for the first time in Nebraska (Manthey and Robbins 2016). Continent-wide BBS data indicate widespread declines except for the central portion of the breeding range. The long-term, survey-wide decline since 1966 is significant, and the annual rate of decline is steeper in Canada (3.2%) than the United States (0.6%).