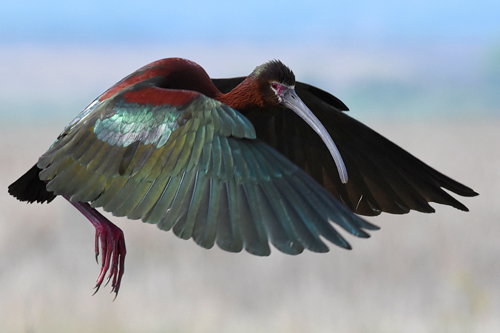 Characteristics and Range A medium-sized heron relative, the adult White-faced Ibis can appear black in poor light, but under good conditions the rich, glossy, chestnut and bronze plumage and decurved bill are striking. The very similar Glossy Ibis is much rarer in Manitoba. The breeding range covers much of western North America, from the extreme south of the Prairie Provinces to southern Mexico, with resident populations in South America. North Dakota (Shaffer et al. 2007) and extreme southern Manitoba represent a recent expansion of the northeastern breeding range limit. Wintering takes place from the southern U.S.A. to Central America.

Distribution, Abundance, and Habitat Almost all sightings during the atlas period were clustered around either Whitewater Lake or the Oak Lake / Plum Lake area, both located in the Prairie Potholes. Confirmed breeding took place at both locations. Birds seen at Melita and the Shoal Lakes were recorded as possible breeders only. Although the White-faced Ibis had been recorded almost annually since 1999 at Whitewater Lake, it was not until 2005 that nesting was confirmed (Bazin and Artuso 2006). The two nests found in 2005 were constructed from both live and dead cattails, the predominant vegetation in the area, with water depth at ~1.5 m.  Ten nests were found in 2007 and these were made from bulrush stems, again the predominant vegetation of the area, amidst a large Franklin's Gull colony (Bazin 2008). Feeding takes place along edges of water-bodies and in emergent vegetation in shallow water, frequently many kilometres from the breeding colonies.

Trends, Conservation, and Recommendations White-faced Ibis numbers at Whitewater Lake have increased steadily since the first nests were found; indicative of this increase was a count of 558 birds seen departing a roost near the southwest corner of the lake in the early morning of 10 September, 2016 (R. Méthot, pers. comm.). Based on this count and other large one-day tallies in wetlands around Whitewater Lake during the breeding season, it is realistic to estimate a nesting population near 100 pairs. Disturbance at the current breeding sites is likely to remain low, due to the inaccessibility of the nesting areas. Nevertheless, Whitewater Lake is currently much higher than historic levels and a return to more normal water levels could alter the vegetation and affect the numbers and breeding success of ibis and other waterbirds. Future breeding at other large marshes in southern Manitoba is plausible, at least during periods when water levels are suitable.