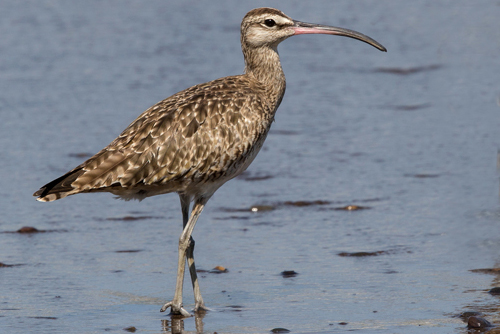 Characteristics and Range The Whimbrel is the only curlew to occur regularly in Manitoba. It is easily recognised by its brown-and-buff striped head, in addition to the characteristic features of its genus (large and brown with long down-curved bills). Its trill and whistle calls, which accompany aerial displays, are also distinctive. This Holarctic species has a breeding population around Hudson Bay from James Bay to Chesterfield Inlet; with another in Alaska, Yukon and coastal Northwest Territories; and disjunct breeding populations in Eurasia. In the Americas, the Whimbrel's wintering range is coastal, from the Salish Sea in the west, and southern Chesapeake Bay in the east, south discontinuously to Tierra del Fuego (Skeel and Mallory 1996). Analysis of geolocator data suggests birds breeding at Churchill winter in coastal Suriname and northern Brazil, often with a stopover on the Atlantic coast of the U.S.A. in both spring and fall (Johnson et al. 2016).

Distribution, Abundance, and Habitat Atlas records show the Whimbrel breeding in a strip around the Hudson Bay coast, reaching 200 km inland along the Nunavut land border (confirmed breeding at Schmock Lake, probable breeding at Nejanilini Lake and Courage Lake, but absent from the well-surveyed Nueltin Lake area) and at least 70 km inland around Wapusk National Park. This adds detail to the previously ill-defined Manitoba breeding distribution along the treeline-tundra transition (The Birds of Manitoba). Analysis of relative abundance suggested the cluster of observations around Schmock Lake - Nejanilini Lake - Courage Lake was as high as in the interior portion of Wapusk National Park, and that both of these areas had slightly higher abundance than the immediate vicinity of the coast. At Schmock Lake and Courage Lake, the Whimbrel was associated with raised topography such as ridges and esker slopes with shallow wetlands at their base (pers. obs.). This is noteworthy because the Whimbrel nests in both dry sites (e.g., heath tundra with dense lichens) and wet sites (e.g., sedge meadows, fens, peat hummocks with Cladonia lichen, dwarf birch and other shrubby areas, and stunted black spruce and tamarack bogs). Sedge tundra has greater densities than heath tundra and taiga peatlands (Skeel and Mallory 1996).

Trends, Conservation, and Recommendations Its wary nature apparently saved the Whimbrel from the fate of its close relative the Eskimo Curlew in the market hunting era; however, it is still hunted on its migratory pathway and wintering grounds (Skeel and Mallory 1996). With a large Holarctic range, the Whimbrel is not a priority species for international conservation efforts, but the suggestion of declines at migratory stopover sites and a small North American breeding population have earned it a listing of High Concern in the Canadian Shorebird Plan (Donaldson et al. 2000). A comparative study showed a decline at Churchill from 7.5 pairs/km2 in 1973 and 1974 to 0.8 pairs/km2 in 2007, with no nesting pairs in 2008, due to shrub and tree encroachment (Ballantyne and Nol 2015). This species still breeds around Churchill; for example, 36 nests were reported in 2010 (N. Senner), but long-term nest searching shows clear declines (E. Nol, pers. comm.). Hemispheric collaboration towards full life-cycle stewardship is imperative for this and other shorebirds.