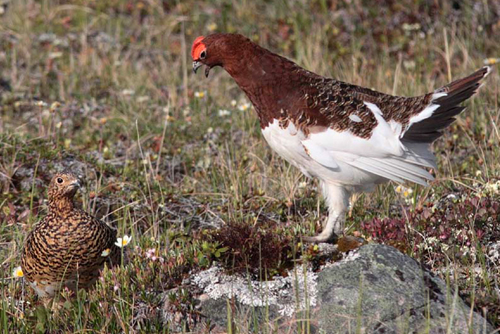 Characteristics and Range Ptarmigan are northern grouse that turn white in winter (except for one famous subspecies in the British Isles). Of the world's three ptarmigan species (genus Lagopus), only the Willow Ptarmigan nests in Manitoba. The male Willow Ptarmigan has red wattles over the eye and deep red tones in courtship and breeding plumages, whereas the female's mottled brown-and-black summer attire is more cryptic. This ptarmigan breeds across the Arctic, subarctic, and montane tundra of the Northern Hemisphere; in North America from Newfoundland to Hudson Bay and Alaska, and south through the mountains of British Columbia (Hannon et al. 1998). Populations in the coldest parts of the range retreat southward or downslope in winter, the Flin Flon and The Pas areas of Manitoba being among the southernmost wintering grounds, but there are sporadic irruptions farther south.

Distribution, Abundance, and Habitat Much as depicted in The Birds of Manitoba, atlas fieldwork documented the breeding range of the Willow Ptarmigan to follow the Hudson Bay coast, extending 100 km inland in the Wapusk National Park area and up to 200 km inland along the Nunavut land border. The York Factory area represents the southern breeding-range limit in Manitoba and this species occupies a similarly narrow strip along the coast east from there into Ontario (Jones 2007). Analysis of point-count data suggests that the relative abundance is lowest in the York Factory area and generally increases northward within the province. The relative abundance was rather low in the immediate Churchill area as compared to the surrounding landscape, possibly related to hunting pressure (Jehl 2004), although this was also found for other northern species such as Red-necked Phalarope and Smith's Longspur. As its name implies, the Willow Ptarmigan is most commonly found in shrubby habitats, such as willow or birch, including wetland and treed edges (Hannon et al. 1998).

Trends, Conservation, and Recommendations Given its Holarctic and relatively remote range, the Willow Ptarmigan is not globally threatened. This species may experience range contractions due to climate change in at least some areas; however, it may also benefit from increased shrub growth in parts of its range such as northern Manitoba (de Juana et al. 2016). Over-harvesting has caused population declines in some areas, including the immediate vicinity of Churchill (Jehl 2004), but this dœs not appear to be generally the case in Canada (de Juana et al. 2016). Further research is needed on the impacts of hunting, resource extraction, contaminants, and climate change (Hannon et al. 1998).