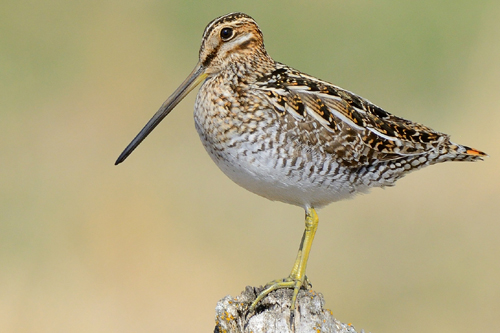 Characteristics and Range This cryptically camouflaged, long-billed shorebird is often first detected when flushed from close quarters, calling harshly and whirring away in a zig-zag flight. In the breeding season, it can also be found by its winnowing, a far-carrying sound created in display flight by air moving over specially adapted tail feathers. Wilson's Snipe was formerly considered conspecific with the Common Snipe (Gallinago gallinago) of Eurasia. It is one of the most widespread Nearctic shorebirds, breeding across North America from Alaska to Newfoundland and south to the northern conterminous U.S.A. It winters from the mildest parts of southern Canada south to northern South America.

Distribution, Abundance, and Habitat Wilson's Snipe is a common species found throughout Manitoba, requiring wetland areas such as bogs, fens, swamps, and roadside ditches to breed (Mueller 1999). It was found in >80% of squares with ≥3 hours of effort in every BCR except the Boreal Softwood Shield (57%), peaking in the Arctic Plains & Mountains (95%). Relative abundance was highest (>6 individuals per 15 point counts) in the southwestern Prairie Potholes, the southern Interlake and low-lying terrain west of Lake Manitoba, the southernmost portion of the Red River valley, and along the Hudson Bay coast from Churchill southward. The probability of observation follows a similar pattern, with reduced likelihood of detection in the agricultural belt southwest of Winnipeg and to a lesser extent on the east side of Lake Winnipeg and along the western boundary of the Boreal Softwood Shield with the Taiga Shield & Hudson Plains. The flight display is frequently detected at night, including during Nocturnal Owl Surveys in April, which may augment detection probability in forested parts of southern Manitoba.

Trends, Conservation, and Recommendations BBS data show significantly increasing long-term trends in both Manitoba and Canada but declining trends in other regions and no statistically significant trend survey-wide. This species' opportunistic use of small and temporary wetlands appears to have led to elevated abundance in southern Manitoba in the current (post-1990s) wet cycle. Wilson's Snipe is considered a species of moderate concern in the Canadian Shorebird Conservation Plan (Donaldson et al. 2000). Despite this, the estimated annual harvest in the U.S.A. and Canada combined in the 1970s was as high as 900,000 birds (Fogarty et al. 1980) and in the late 2000s was still over 100,000 (Raftovich 2012). Habitat loss through wetland drainage continues to be a problem for this species (Mueller 1999).