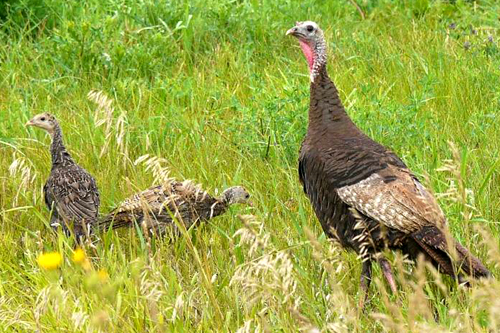 Characteristics and Range Turkeys hardly need an introduction, as they are familiar to all North Americans, whether in their wild form or as domesticated fowl. Often found in flocks, the Wild Turkey is one of Manitoba's largest birds, with a blackish plumage that shows green and bronze iridescence, especially in males. Both sexes of the eastern race, the most common form in Manitoba, have rusty tails. Birds of the western race, less common here, are paler. Displaying males fan their tails, expand their red throat wattles and strut. Females are considerably smaller and less colourful than males. Originally a resident of eastern and central North America, today the Wild Turkey is resident from Maine to British Columbia and south to Florida, central Mexico, and southern California (McRoberts et al. 2014). Some portion of this range, including Manitoba, are a result of introductions (in Manitoba since 1958, The Birds of Manitoba) or re-introductions following extirpation (McRoberts et al. 2014).

Distribution, Abundance, and Habitat Wild Turkeys were recorded in 17% of squares in the Prairie Potholes, 5% of the Boreal Hardwood Transition (mostly in farmland east of the Red River valley) and 2% of the Boreal Taiga Plains (mostly in the eastern Red River valley). Records north of the range depicted in (The Birds of Manitoba included possible breeding north of Ethelbert (Garland) and north of Arborg, but these were well separated from the main range. There were too few records to calculate relative abundance, but a slightly elevated probability of observation was noted in the region between Portage la Prairie and the U.S. border near Morden and in the Turtle Mountain area. In Manitoba, the Wild Turkey is usually found around farmsteads, edges of deciduous woodlands, and in wooded river valleys. Winter flocks frequently find food and shelter from severe cold at farms and in barns, or in yards where food is supplied. Unless augmented by new releases, many Manitoba flocks eventually dwindle and disappear, except in the extreme south of the province, where marginally warmer winters allow them to persist (The Birds of Manitoba).

Trends, Conservation, and Recommendations A species with a long history of being hunted and consumed by humans, the Wild Turkey population was at the point of collapse at the beginning of the 20th century (McRoberts et al. 2014). The species has greatly recovered since the 1960s as a result of management, conservation, and releases. Long-term BBS data hence show the population to be increasing (reliability is generally low but these trends are supported by other methods including aerial and ground surveys, questionnaires, poult counts, and survival estimates, McRoberts et al. 2014). Occasional releases still occur, as dœs supplemental feeding of winter flocks in Manitoba.