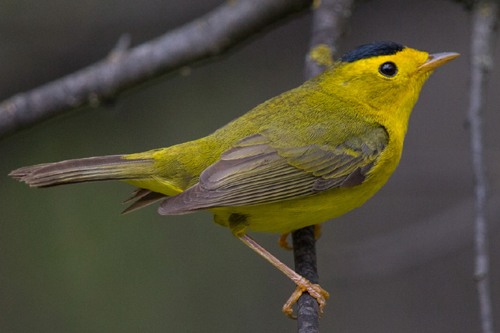 Characteristics and Range This wood-warbler breeds in the northern two-thirds of the province, and is most familiar to Manitoba birders as a passage migrant. Although males are distinctive with their black "skullcap", females are superficially similar to the Yellow Warbler. The breeding range extends across the boreal forest from Alaska to Newfoundland, as well as through the Rocky Mountains, Pacific Coast Ranges, and temperate coastal forests, with southern limits in northern New Mexico, California, and northern New England respectively. The winter range includes a variety of forest types from the Gulf of Mexico to Panama (Ammon and Gilbert 1999).

Distribution, Abundance, and Habitat The distribution documented by atlassers closely matches that estimated in The Birds of Manitoba with finer detail of the southern range limit coming from possible breeding records in 12 squares near Riverton, River Hills, Otter Falls, on the Grindstone Peninsula, in the northern Whiteshell Provincial Park, and in and near the Duck Mountains. Although detected at the Nunavut border in the west (Nueltin Lake) and as far north as the Seal River approximately 30 km from the coast, this species appears to be absent from the Arctic Plains & Mountains. Relative abundance appears to peak in the Taiga Shield & Hudson Plains, especially along the treeline-tundra transition, and is moderately high within the Boreal Softwood Shield, but decreases south of this BCR. This species is somewhat difficult to identify by song and can be overlooked during species-rich point counts. This is worth considering in abundance comparisons of the northern and southern portions of the range.

In Manitoba, Wilson's Warbler is most commonly found in coniferous bogs (especially with stunted trees), swales of alder or willow, and shrub-lined creeks. Wet, shrubby depressions that have been skipped by forest fires are also used (P. Taylor, pers. comm.). Several of the southern records (e.g., near Riverton) were in wet, shrubby, roadside ditches (B. Shettler, pers. comm.), and this human-altered habitat may be suitable for breeding.

Trends, Conservation, and Recommendations BBS data show long-term stability in Manitoba and in Canada, but coverage in the northern boreal forest is marginal and reliability correspondingly low. There are concerns elsewhere in the range, such as for the rapidly declining chryseola subspecies of the Pacific coast (Rundell et al. 2013), and other indicators of decline from migration counts or other sources (Ammon and Gilbert 1999). Disturbances that have been shown to be detrimental, including livestock grazing in forested areas, human recreational activities in breeding habitat, pesticides, and habitat disturbance around water bodies, could all be mitigated for the benefit of this and other species (Ammon and Gilbert 1999). Few of these factors are significant in this species' core northern Manitoba range.