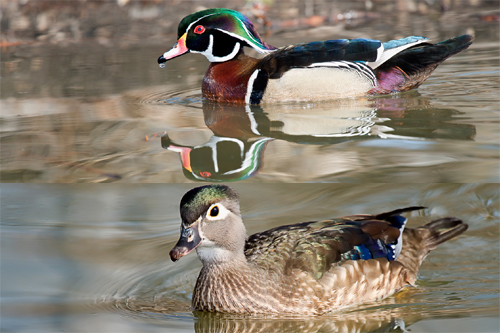 Characteristics and Range The handsome male Wood Duck is a distinctively marked bird, unlikely to be mistaken for any other species. It has a multi-hued body and head, mostly red bill, and drooping crest. Females are mostly brownish and lack the crest and red in the bill, but they do have a distinct white eye patch and iridescent wing highlights. There are two disjunct main breeding populations. The eastern population breeds from central Saskatchewan across southern Canada to Nova Scotia and south to the Gulf States and Cuba, while the western population occurs from southern British Columbia and Montana south to California, with small isolated populations in the central U.S.A. Most Wood Ducks winter in the breeding range, but the northernmost breeders, including those from Manitoba, move to southern U.S.A. and northern Mexico (Hepp and Bellrose 2013).

Distribution, Abundance, and Habitat Wood Ducks are fairly evenly distributed across the Prairie Potholes and the Boreal Hardwood Transition, with detections in 46% of surveyed squares in the former and 38% in the latter. Numbers decline to the north, with 16% of surveyed squares occupied in the Boreal Taiga Plains and 3% of squares in the Boreal Softwood Shield. The northernmost confirmed breeding took place in the vicinity of Norway House and the Minago River south of Ponton. These locations are north of the range as mapped in The Birds of Manitoba and likely attest to both lack of coverage in the past and continuing expansion of the species' breeding range. Areas around Riding Mountain National Park and Duck Mountain Provincial Park also appear to be newly occupied (The Birds of Manitoba). Abundance is fairly uniform throughout the Manitoba range, although slightly elevated in central southern Manitoba. Wood Ducks are most often found in riparian habitats, wooded swamps, and freshwater marshes, where they breed in tree cavities, such as abandoned Pileated Woodpecker nest holes. Moulting males and some females gather on small water bodies within the breeding range.

Trends, Conservation, and Recommendations Threats and Recommendations In the late 1800s the Wood Duck was considered a rare summer resident in the province (Thompson [Seton] 1890). Heavy hunting pressure in the U.S.A. and limited availability of suitable nesting sites in Manitoba were primarily responsible for this scarcity. Forest maturation and increases in breeding habitat in the province, coupled with decreased hunting pressure throughout the range, allowed the species to expand its range and its numbers during the past century. The widespread placing of nest boxes in suitable habitat has aided in this increase (Hepp and Bellrose 2013), and has presumably augmented numbers in many cities and towns in Manitoba (pers. obs.). Long-term BBS results from the Boreal Taiga Plains and the Prairie Potholes show an increasing trend but with low to medium statistical reliability. It is likely that the breeding range will continue to slowly expand and there are no major identifiable threats.