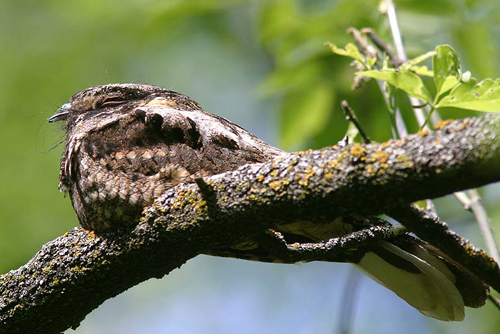 Characteristics and Range The Eastern Whip-poor-will is familiar mostly for its namesake vocalizations. The song is loudly and incessantly delivered during twilight and bright moonlight, but by day the bird perches, silent and motionless. It avoids wide open spaces and dense forests, preferring open, upland deciduous or mixed woods. It breeds from the Maritimes to east central Saskatchewan, southward through most of the U.S.A. east of the Great Plains and north of the Gulf Coast (Cink 2002). It winters from the Gulf Coast to Panama; Canadian populations mostly winter in Central America south of Mexico (English et al. in press).

Distribution, Abundance, and Habitat Atlas fieldwork confirmed the main provincial range is in a band from the Boreal Hardwood Transition northwestward through the Interlake region of the Boreal Taiga Plains, reaching the Saskatchewan border north of the Prairie Potholes. This species was found more sparingly elsewhere—along the edge of the Prairie Potholes near Lake Manitoba and in the southern parts of the Boreal Softwood Shield, mostly east of Lake Winnipeg but also north of The Pas. The Birds of Manitoba had estimated the northern limit to lie near the latitude of The Pas in the west and Little Grand Rapids in the east, but atlas records near Lynn Lake and at Island Lake demonstrate occurrence up to 300 km farther north. This probably represents an extension of knowledge rather than a range extension, and the population density at these latitudes is low.

Because the Eastern Whip-poor-will is inactive by day, it requires special surveying effort. Its presence and abundance were not well captured by the point count method, as point counts started no earlier than 30 minutes before sunrise, which is just 10 minutes after the pre-dawn singing period for this species usually ends. Indeed, it was noted on only 9 point counts—too few to estimate abundance. Nocturnal Owl Surveys were conducted too early in the year for Eastern Whip-poor-wills to be detected, but a few observers conducted intensive nocturnal atlassing, especially in southeastern Manitoba and the central and northern Interlake, in order to detect this species and American Woodcock. The probability of observation shows that the species is most likely to be observed in three areas: the Boreal Hardwood Transition in the southeast, the Interlake portion of the Boreal Taiga Plains, and east of Lake Winnipeg in the Boreal Softwood Shield. This is consistent with the habitat requirements of the species—forest that is open through disturbance (such as fire) as well as the presence of pine and trembling aspen.

Trends, Conservation, and Recommendations Canadian BBS data for this species (notwithstanding the limited utility of point counts noted above) show a significant declining trend of 3% per year. The species is listed as Threatened both in Canada and in Manitoba. There is no assessed trend for Manitoba, although anecdotally the species is now less commonly found than in the 20th century (COSEWIC 2009a). The causes of decline are poorly understood, but there have been widespread declines in the populations of most North American aerial insectivores since the 1980s (Nebel et al. 2010). There are opportunities for habitat conservation through selective forestry practices.