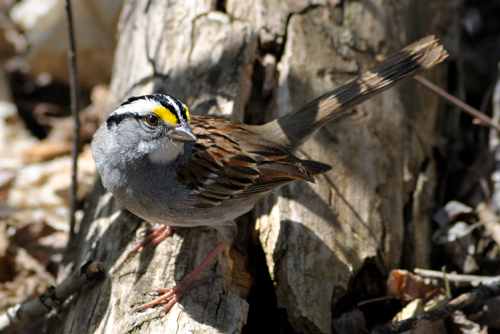 Characteristics and Range With its loud, omnipresent, Oh-sweet-Canada-Canada-Canada song, the White-throated Sparrow is better known vocally than by sight. Its claim to biological fame is that it effectively has four sexes resulting from an inversion in a section of one chromosome which forces the tan-striped and white-striped morphs to mate disassortatively, i.e., with dissimilar partners (Falls and Kopachena 2010, Tuttle et al. 2016). The White-throated Sparrow breeds from Newfoundland to southeastern Yukon and south to the Great Lakes, including all but the extreme southwest and northeast of Manitoba. It winters across much of the southeastern U.S.A. south of the Great Lakes as far west as Arizona, and in low densities along the Pacific coast as far north as southern British Columbia (Falls and Kopachena 2010). Uncommon overwintering in Manitoba is closely tied to feeders.

Distribution, Abundance, and Habitat As noted in The Birds of Manitoba, the White-throated Sparrow was common throughout the boreal portions of Manitoba but largely absent in the Arctic Plains & Mountains and the immediate vicinity of the Nunavut land border. It was restricted in the Prairie Potholes to well-treed areas with some elevation such as the Arden Ridge, Spruce Woods, and the Turtle Mountains, and forested river valleys such as the Upper Assiniboine. It was most abundant in the southern boreal forest, especially the eastern portion of the Boreal Hardwood Transition, the southeastern Boreal Softwood Shield, and in the Boreal Taiga Plains along the Manitoba Escarpment and in the central Interlake from approximately Lake St. Martin to Long Point. Relative abundance was also high throughout most of the central and northern boreal forest but decreased gradually in the Taiga Shield & Hudson Plains. Relative abundance was moderately high in the boreal-parkland transition but decreased sharply in the Prairie Potholes. The probability of observation of this loud songster was almost uniformly high throughout the boreal forest and its transition zones, decreasing in the open prairie and tundra regions.

As a habitat generalist, this is one of Manitoba's most abundant species within its core breeding range, averaging three or more individuals per point count in some squares. Point counts may underestimate abundance as tan-striped males are less vocal and more cryptic (Falls and Kopachena 2010) and because there is a strong pre-sunrise peak in singing. This species breeds in every type of deciduous, coniferous, and mixed forest in every seral stage (age class). Nonetheless, it prefers some openings or edges and is uncommon in dense black spruce bogs (Falls and Kopachena 2010). Within the Prairie Potholes, it is associated with ungrazed stands of trembling aspen (pers. obs.) and may benefit from aspen encroachment into former grassland.

Trends, Conservation, and Recommendations BBS data show stable populations since the 1970s in Manitoba and in Canada despite some declines in the east and increases in the west. Combined analyses suggest a possible range-wide decrease of 23% in the same period (Rosenburg et al. 2016). The White-throated Sparrow may benefit from small-scale forestry but declines with deforestation (Falls and Kopachena 2010).