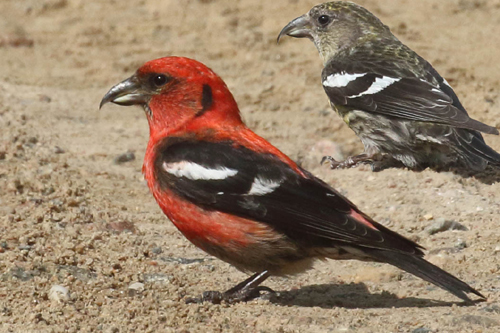 Characteristics and Range The White-winged Crossbill is a medium-sized finch. Typical males have a deep pink (winter) to red (summer) head and body, blackish wings with bold white markings, and dark tail. Greenish and yellow hues replace the pink or red in other plumages; all have some dark streaking, especially juveniles. The crossed mandibles enable seed extraction from cones. Noted for erratic wandering, the White-winged Crossbill can occur (and even breed) at any time in coniferous and mixed-wood forests of Canada, Alaska, and parts of the northern conterminous U.S.A. Sporadic winter movements may bring it far south. Eurasian populations roam boreal forests from Scandinavia to Siberia.

Crossbills are noted for sometimes breeding in winter, being able to rear young on seeds alone. Three main breeding periods have been identified for the White-winged Crossbill (Benkman 2012): (a) starting in early July, as white spruce and tamarack cones mature; (b) starting in January and February, when white spruce cones are abundant; and (c) starting in March and April, when black spruce cones open. In Manitoba, the first of these periods seems most important, followed by the third (pers. obs.). When white spruce cones are abundant, irrupting White-winged Crossbill numbers tend to diminish in December, suggesting they move on to breed elsewhere. Thus, winter breeding may not be important in Manitoba. Summer occurrence is highly erratic in the southern boreal forest, the last major breeding event being in 1996 (BBS data), but is much more frequent in regions north of Manitoba's "great lakes". While large flocks may occur in summer, breeding is indicated by frequent singing.

Distribution, Abundance, and Habitat Atlas records span the boreal forest from the southeastern Boreal Hardwood Transition and forested islands of the Manitoba Escarpment north to the Hudson Bay coast and the Nunavut land border. Though represented in all six BCRs, detection was most frequent in the Boreal Softwood Shield (46% of surveyed squares, mostly northern areas) and the Taiga Shield & Hudson Plains (32%). This northerly core distribution is evident in the probability-of-observation map. Point-count data did not yield useful abundance maps, presumably because of year-to-year fluctuations and highly localized concentrations. The species was most widespread in the 2011 and 2012 atlas seasons, when it was detected in almost 20% of point counts in the Thompson - Lynn Lake -The Pas region. Occurrence in the southeastern boreal forest was also most prominent in 2012.

Trends, Conservation, and Recommendations BBS and CBC data tell us little about the White-winged Crossbill beyond the years and geographic extent of southerly irruptions. Survey-wide peak BBS numbers have been recorded in the region north of Lake Winnipegosis, but there is little coverage elsewhere in the mid-boreal forest. Trends everywhere are characterized by high uncertainty, though a continuous belt of apparent long-term decline from central Alberta to southwestern Quťbec (BBS data) is troubling. Suggested conservation measures include large-scale protection of the boreal forest (Benkman 2012). Reduced use of road salt has also been recommended, because of high mortality from vehicle collisions arising from the craving for salt this unwary species shares with several other finches (Benkman 2012).