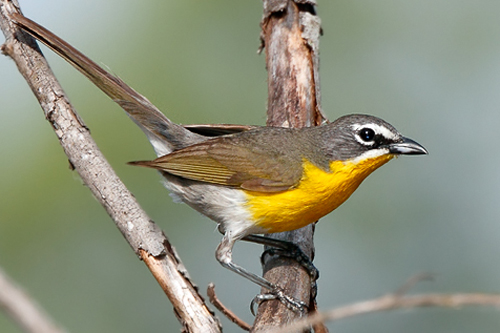 Characteristics and Range Though striking in appearancewith its rich yellow throat and breast, bold facial pattern and long tail, the Yellow-breasted Chat is a skulking bird most likely to be detected by the male's comically varied song. It represents a taxonomic minefield. Long considered an aberrant, oversized member of the wood-warbler family (Parulidae), it was recently elevated to its own family, Icteriidae, not to be confused with Icteridae (New World blackbirds and allies). The irregular-shaped breeding range takes in much of the U.S.A. and extends into parts of southern Canada and northern Mexico, while the winter range is from coastal and eastern inland Mexico to western Panama (Eckerle and Thompson 2001).

Distribution, Abundance, and Habitat The Yellow-breasted Chat is an occasional visitor to Manitoba, with now nearly 30 records scattered across the south but weighted towards the southwest. This pattern reflects the normal range, which closely approaches Manitoba in southern Saskatchewan and western North Dakota. The sole atlas record was at Bradwardine, where a territorial male found by K. De Smet on July 19, 2013 remained into August, thus qualifying as a probable breeder (Koes and Taylor 2014). Two years later, likely the same bird was observed at the same location from June 30 to July 12, 2015 (Koes and Taylor 2016b) and again in 2016. Preferred breeding habitat is dense, low shrubby vegetation without a closed tree canopy (Eckerle and Thompson 2001).

Trends, Conservation, and Recommendations Though seemingly secure overall, the Yellow-breasted Chat is a bird of conservation concern in some peripheral portions of its range; two of three distinct Canadian populations are Endangered (COSEWIC 2011). Analysis of BBS data shows a patchwork of population trends, with strongest decreases in the southeastern U.S.A. and increases in much of the west. Management suggestions focus on this species' exploitation of patchy, short-lived, shrubby habitats (e.g., early succession after fire, logging, or field abandonment), but it is too rare in Manitoba for realistic management.