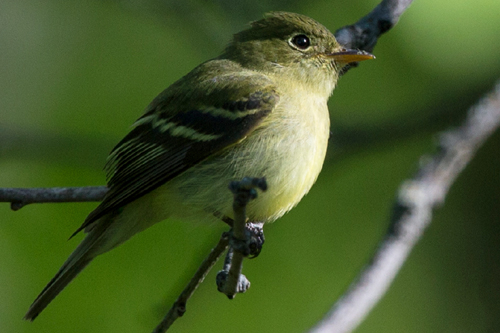 Characteristics and Range The soft voice of the Yellow-bellied Flycatcher is often the only indication of the presence of this inconspicuous breeding visitor to mossy boreal forest and muskeg. Although easily overlooked, it is a widespread breeder throughout the Canadian boreal forest and into the Boreal Hardwood Transition including the northern U.S.A., with isolated populations in the montane forests of the Adirondacks and Appalachians as far south as West Virginia. Its stay in Manitoba is brief, arriving from late May to early June and leaving again in August and early September to return to its wintering grounds from Mexico to Panama (Gross and Lowther 2011).

Distribution, Abundance, and Habitat The distribution of the Yellow-bellied Flycatcher documented during the atlas is very similar to that depicted in The Birds of Manitoba with two exceptions: none were found breeding during extensive atlassing in Riding Mountain National Park (where it was described as a probable breeder), and a minor range adjustment was noted in the Nueltin Lake area. High abundance was found in the Boreal Softwood Shield and Taiga Shield & Hudson Plains, where extensive coniferous forests and peatlands are prevalent, with the peak relative abundance straddling the boundary between the two regions. Abundance decreased southwestward through the Boreal Taiga Plains and the Boreal Hardwood Transition, with an isolated pocket of higher probability of observation in the Porcupine Hills. Higher occupancy was found in the Boreal Hardwood Transition than the Boreal Taiga Plains, but this is likely an artifact of observer coverage.Manitoba's only ground-nesting flycatcher, the Yellow-bellied Flycatcher is associated with thick moss groundcover and peatlands in the boreal forest, especially sites with some structural complexity, containing both shady conifers and some open canopy or shrubby areas (Gross and Lowther 2011). In Manitoba, it is found most commonly in black spruce (arguably most common overall), tamarack, jack pine, and to a lesser extent eastern white cedar, and balsam fir. Nonetheless, especially in the north, it is also found in willow swales between esker ridges and other riparian or wetland contexts with few conifers, as well as in some very dry jack pine sites that seem to belie its supposed reliance on moss or peat groundcover.

Trends, Conservation, and Recommendations The bulk of the Yellow-bellied Flycatcher's boreal range is too far north of BBS coverage to estimate reliable population trends; however, there is a slight long-term increase in Canada as a whole. Habitat loss and degradation on its wintering grounds may pose a significant threat to this species (Gross and Lowther 2011). Given the species' association with moss and peat, desiccation of the ground layer from forest fragmentation (greater solar exposure) and climate change could pose problems (Gross and Lowther 2011). As with many deep boreal species, the Yellow-bellied Flycatcher warrants closer monitoring.