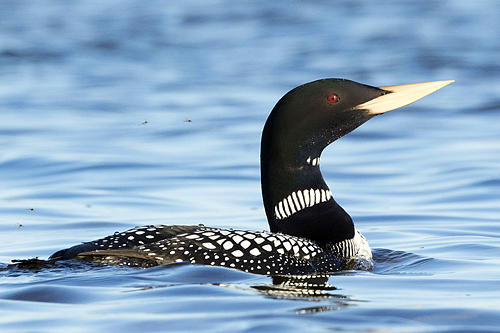 Characteristics and Range This larger and more northern cousin of the Common Loon is identified by its yellowish-white bill and other subtle features. The North American population breeds in the central Canadian Arctic and northern Alaska, and winters along the Pacific coast from Kodiak Island to Puget Sound, with some (increasingly frequent) inland records. This species also nests in northern Siberia and winters in coastal northern Scandinavia, eastern Siberia, and coastal Japan (North 1994).

Distribution, Abundance, and Habitat The Yellow-billed Loon was not considered to be a breeding species in Manitoba, although two records from the 1940s from the Nunavut portion of Nueltin Lake (see The Birds of Manitoba) suggest the breeding range comes tantalisingly close. The only atlas record was a single bird heard by K. Kingdon and subsequently seen in flight by C. Artuso on 21 June, 2014, approximately 5 km north of the Caribou River and 20 km inland from Hudson Bay (50 km south of the Nunavut land border), in seemingly suitable nesting habitat (a series of large tundra ponds with various islands in treeless tundra). Given the constraints of remote area surveying, local breeding could not be confirmed in this case. The vast majority of Manitoba records are from Churchill but these are believed to pertain to passage migrants only, including an intriguing record of an adult Yellow-billed Loon (unconfirmed) and a probable hybrid Yellow-billed Loon X Common Loon photographed on the Churchill River on 9 June, 1987 (Sibley 2011).

Trends, Conservation, and Recommendations The population trends of the Yellow-billed Loon are poorly understood but this species is now listed as globally Near-threatened due to perceived declines, which may be related to harvesting in the Bering Sea and vulnerability to oil spills and heavy metal contamination (Birdlife International 2017). Further monitoring is required to understand the Yellow-billed Loon's status in Manitoba and Canada.