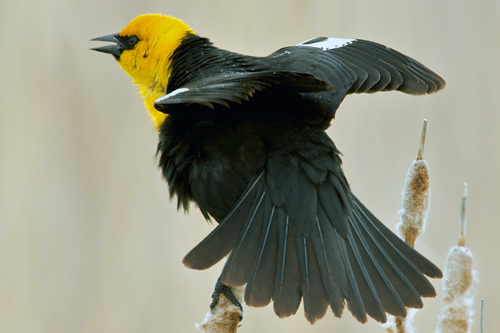 Characteristics and Range A contender for the most discordant song among songbirds, recalling a vuvuzela player drowning in the marsh, this loud yet endearing blackbird can be detected at great distances. Its distinctive yellow head and black body with white wing patches (brightest and most contrasting in males), however, rank it among the most attractive of our wetland inhabitants. The Yellow-headed Blackbird nests in marshes from the Great Lakes west to the Central Valley of California, mostly south of the boreal biome but extending as far north as Lake Athabasca, and as far south as the Texas Panhandle. It winters along the Pacific coast and from the southernmost U.S.A. to central Mexico (Twedt and Crawford 1995).

Distribution, Abundance, and Habitat Atlas results show the Yellow-headed Blackbird nesting south of a line from roughly the Pinawa area to The Pas, much as depicted in The Birds of Manitoba, although it was found in only one square in the area from Grand Rapids to Devils Lake in the northern Interlake. The low numbers or absence in peripheral breeding areas east of the Red River valley (compare Taylor 1983) may represent a southwestward concentration of this species, rather than a decline. There were two outliers in the Boreal Softwood Shield: confirmed breeding along the Burntwood River just north of Snow Lake and probable breeding near Bissett. Relative abundance was highest in the southwestern Prairie Potholes, including parts of the Upper Assiniboine River valley, and in the marshes around Lake Manitoba. From these areas abundance decreased sharply north and east towards the boreal biome, with a small exception of an enclave of moderate density in the Carrot River valley near The Pas. In Manitoba, the Yellow-headed Blackbird is a bird of wetlands with extensive emergent vegetation of cattails, bulrushes, or Phragmites, although it sometimes nests in altered habitats such as the cattail-lined edges of sewage lagoons and will travel to surrounding agricultural areas to forage. Farther west, other habitats including montane meadows are also used (Twedt and Crawford 1995). Even within the Prairie Potholes, its mean abundance is less than half that of the more generalist Red-winged Blackbird.

Trends, Conservation, and Recommendations Despite being considered an agricultural pest, which gives rise to lethal control in some areas (Twedt and Crawford 1995), the Yellow-headed Blackbird shows stable populations in Manitoba and Canada (BBS data) and is generally considered abundant. Wetland loss through drainage is obviously a major concern, but this species, by virtue of its selection of larger and deeper wetlands as breeding sites, may be partially shielded from this problem, at least during the past two decades of above-average precipitation in Manitoba. Agricultural food sources could conceivably increase winter survivability, although contamination from pesticides and other sources likely causes negative impacts (Twedt and Crawford 1995).