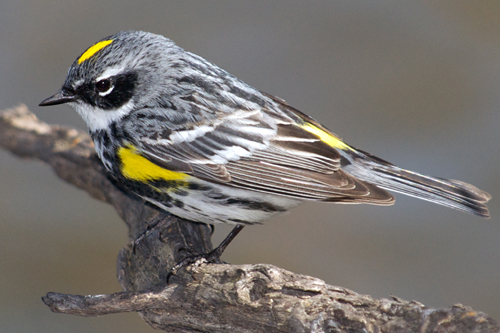 Characteristics and Range This common wood-warbler was formerly considered two species: the "Myrtle Warbler" (white throat) mostly east of the Rocky Mountains and "Audubon's Warbler" (yellow throat) in the Rocky Mountains and farther west. It may be split into three species based on recent research (Tœws et al. 2016). It breeds across North America from Newfoundland to Alaska, south to the Great Lakes, but excluding the Great Plains except for forested islands such as the Turtle Mountains and the Cypress Hills. It also breeds in parts of the Western Cordillera as far south as Guatemala ( Hunt and Flaspohler 1998 ). This wood-warbler is omnivorous, feeding in particular on southern wax myrtle berries in the southeastern U.S.A. This behaviour allows it to winter farther north than other wood-warblers, into southernmost British Columbia, Ontario and Maine where few insects are available in winter. From these regions its winter range extends southwards along both coasts, across the southern U.S.A. to Middle America ( Hunt and Flaspohler 1998 ).

Distribution, Abundance, and Habitat The Yellow-rumped Warbler was found breeding across the boreal forest except for Manitoba's northeastern corner (i.e., the Arctic Plains & Mountains north of the Seal River). Within the Prairie Potholes it was mostly restricted to coniferous habitat in boreal islands such as the Spruce Woods area, Turtle Mountains and Birds Hill Provincial Park. Relative abundance was high throughout the Boreal Hardwood Transition, northern Boreal Taiga Plains, Boreal Softwood Shield, and the western portion of the Taiga Shield & Hudson Plains (though decreasing in the Hudson and Arctic Plains). Relative abundance was low in the occupied portions of the Prairie Potholes and the fragmented forest in the Boreal Taiga Plains south of Hecla Island. The probability of observation shows a similar pattern. Given the species' preference for mature coniferous or mixed woods, these patterns of limited distribution and density in the prairie portions and tundra regions of the province are expected. Possible breeding records in the Turtle Mountains, and at scattered locations elsewhere in the southern Prairie Potholes, are associated with conifer plantations.

Trends, Conservation, and Recommendations Overall, this is a species of low conservation concern. Although long-term BBS data suggest the population is stable to increasing across Canada and range-wide (Rosenburg et al. 2016), there is a declining trend in the Boreal Taiga Plains and Boreal Softwood Shield within Manitoba. This species has benefited from conifer plantations and is capable of using disturbed habitats in migration and winter ( Hunt and Flaspohler 1998 ).