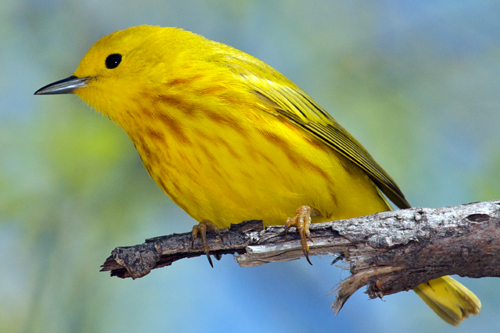 Characteristics and Range This little ray of sunshine is usually straightforward to identify. Both sexes are essentially completely yellow with olive tones on the back, the brighter male bearing bold chestnut streaks on the underparts. Canadian birders of every region recognise its melodic sweet-sweet-little-bit-sweet song, although one of the song types of Manitoba-breeding males is remarkably similar to that of the Chestnut-sided Warbler. This is one of the most widespread North American wood-warblers, nesting across much of the continent, as far north as the subarctic and the coast of the Beaufort Sea. Farther south, its range extends across Canada and the northern two-thirds of the conterminous U.S.A., being scarce or absent only in the driest of regions, with somewhat disjunct breeding populations occurring in Baja California and along Mexico's Pacific Slope. The taxonomy of the distinctive non-migratory populations (petechia and erithachorides groups of subspecies) of Middle America and northern South America is unsettled. North American populations (aestiva group) winter from Mexico to northern South America (Lowther et al. 1999).

Distribution, Abundance, and Habitat The Yellow Warbler was a conspicuous nester across the entire province. It was found in over 2,000 atlas squares, the fourth highest of any species, and it was the 10th most abundant species on point counts. The highest densities were recorded around major waterbodies and along waterways, including the Lake Manitoba and Assiniboine River watershed, but also, more generally, in the parkland habitats of the northern portion of the Prairie Potholes and the southern Boreal Taiga Plains, where this species was found in over 90% of surveyed squares. Relative abundance was lower in much of the conifer-dominated boreal forest, especially the western portion of the Boreal Softwood Shield, despite being high in the Hudson Bay Lowlands, especially along willow-lined rivers. Probability of observation was relatively high throughout the province, though lowest in the central boreal forest, especially the western part of the conifer-dominated Boreal Softwood Shield. Even in this BCR, the species was observed in nearly half of all squares surveyed, albeit at much lower densities.

The Yellow Warbler uses a wide variety of habitats, but is most typically found in shrubby deciduous woods or in early-successional growth, often (but not exclusively) near water (Lowther et al. 1999). This is one of few wood-warblers to breed commonly in gardens and urban settings. These broad habitat preferences explain the pattern of higher densities in the Prairie Potholes and the Hudson Bay coastal region, as compared to the central boreal forest.

Trends, Conservation, and Recommendations The Yellow Warbler is generally considered Secure and BBS trends for Manitoba suggest relative stability since the 1970s despite modest declines Canada-wide. These differences may reflect declines in early-successional, shrub or riparian habitats outside of Manitoba. Protection of riparian corridors and suitable buffers from grazing and other kinds of disturbance around waterways benefit this species and many others (Lowther et al. 1999).