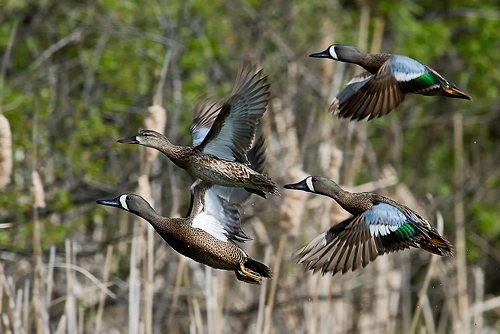 Characteristics and Range This small dabbling duck, named for the bright blue patch on its inner wing that is obvious in flight, is one of the most common waterfowl in southern Manitoba. With the exception of much of the Pacific coast, it breeds from eastern Alaska across Canada south of the treeline and as far south as the Texas Panhandle. Its core breeding range is in the midcontinent, from the northern Great Plains east to the Great Lakes (Rohwer et al. 2002). It is a comparatively long-distance migrant among waterfowl, wintering from California and the Gulf of Mexico to northern South America.

Distribution, Abundance, and Habitat The distribution documented matches that estimated in The Birds of Manitoba with the most widespread occurrence in the Prairie Potholes (found in 81% of surveyed squares), decreasing northward towards the Gillam area, and with three outlying occupied squares near Churchill. Within this distribution, there is a general avoidance of large swaths of forest with treed rather than open wetlands. Probable breeding was recorded in two of the three squares near Churchill. This is noteworthy because the nearest probable breeding was around Thompson and there were no other detections in the Hudson Bay Lowlands, nor in adjacent Ontario (Ross 2007). Relative abundance was markedly high in the Prairie Potholes, especially south and west of Riding Mountain National Park, followed by the Boreal Taiga Plains and decreasing northward and eastward. The probability of observation showed the same pattern but predicted sparse distribution north towards Churchill. Unlike many duck species, this teal uses diverse habitats such as potholes, wooded wetlands, creeks, and lakes, but prefers shallow water with many invertebrates for breeding and rearing young (Rohwer et al. 2002). The high abundance of this species as compared to many other waterfowl, which peaked at >2.6 individuals per 15 point counts in southwestern Manitoba, is likely linked to it being a habitat generalist.

Trends, Conservation, and Recommendations After the Mallard, the Blue-winged Teal is the second most abundant duck species in the Prairie Potholes (Rohwer et al. 2002). The BBS population trend is stable, despite some fluctuation, in both Manitoba and Canada. Based on aerial surveys, there was a significant decline of 2.6% per year in the Boreal Taiga Plains from 1970 to 2006 but numbers remained stable in the Prairie Potholes (Fast et al. 2011). Effective conservation of this species must consider both wetlands and surrounding uplands, especially grasslands for nesting, which have been heavily impacted by agriculture across the Great Plains. The Conservation Reserve Program in the U.S.A. and the North American Waterfowl Management Plan are likely key positive factors in the current abundance of this species.